USA Today reports that the divorce of Ashton Kutcher and Demi Moore has been finalized. The terms of the divorce have not been released, but Ashton Kutcher seems happy, reportedly announcing that he “has something to be thankful for.” 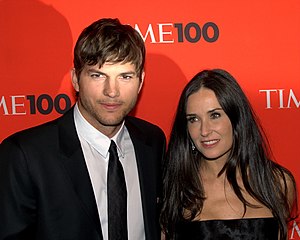 The process has not been easy for the married couple who were married a scant six years, although this is almost an eternity by Hollywood’s standards. The couple has been physically separated for over two years and has been attempting to complete their divorce for at least one year.

The couple married in 2005 and separated six years later. Ashton Kutcher reportedly filed for divorce in December 2012, but the divorce was stalled due to disagreement over how the couple’s money should be split.

Ashton Kutcher has not been lonely during the separation. He is currently dating his That ’70s Show co-star Mila Kunis. He also replaced Charlie Sheen on Two and a Half Men. He also is part owner of Dolce Enoteca Ristorante, an Italian restaurant in Los Angeles, and also Geisha House, a modern Japanese Restaurant, Sushi Bar and Sake Lounge in Los Angeles.

This was the first marriage for Ashton Kutcher. Demi Moore, however, was previously married to Die Hard star Bruce Willis and has three daughters with him: Rumer Glenn Willis, Scout LaRue Willis and Tallulah Belle Willis. Moore has also remained busy and is set to star in the upcoming film Very Good Girls.

How did Ashton Kutcher and Demi Moore meet?

According to Moore, the night she met her ex was a “life-changing evening.” They pair felt an immediate connection, despite their fifteen year age gap. Both Ashton Kutcher and Moore describe the meeting like meeting someone you’ve known your whole life and have an immense amount of feelings for, even if the time together doesn’t warrant such emotion.

Despite rumors that the relationship wouldn’t last or she was too old for him, the pair was married on the evening of September 24, 2005, in Beverly Hills at their home. The wedding was arranged at the last-minute and was a traditional Kabbalah ceremony.

The pair vacationed in Barcelona, Spain where they stayed at the Hotel Rey Juan Carlos.

Unfortunately, like so many Hollywood couples, their romance did not last. But like everyone always says, I am sure they will remain perfect friends and wish each other the very best in life.