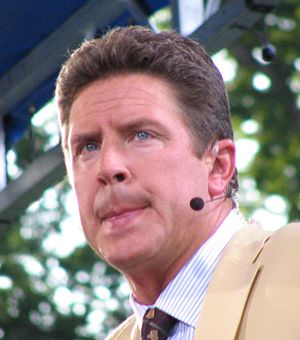 When Diana Ross and the Supremes hit the charts in 1968 with a song about a child born out of wedlock, they weren’t introducing a new concept. The song kicked The Beatles out of the top spot and set to music a real-life social issue that is still prevalent today. It’s a scenario particularly popular in certain press outlets because it seems to go hand-in-hand with celebrity.

Recently, news came to light about another child born to a married man, and not of his wife.

Last month the Pro Football Hall of Famer confirmed to The New York Post that he had fathered a child with former CBS Sports production assistant Donna Savattere back in 2005.

“This is a personal and private matter,” Marino –  a CBS Sports anaylst – told The Post in a written statement. “I take full responsibility both personally and financially for my actions now as I did then. We mutually agreed to keep our arrangement private to protect all parties involved.”

Desperate to preserve his clean-cut all-American image intact, Marino said he told no one but his wife, Claire Marino, he had a baby with Savattere,  paying the mistress “hush money” and keeping his CBS Sports bosses  as well as his longtime agent  in the dark for seven years, The Post reported.

“Danny did, as difficult as it was, tell his wife in 2005, when this occurred,” a source close to Marino, told the tabloid. Marino and his wife have six children. The girl, named Chloe, is now eight years old.

So what is it with celebrities and out of wedlock children? Are they worse than the rest of us, or just more noticed because they are in the limelight?

Having a celebrity love child comes at a cost: There are multi-million-dollar paternity suits and six-figure child support payments to make. Not to mention the leering celebrity press that seem to feed on such falls from grace.

Before 1970, the Times reported, most unmarried mothers were teenagers. But in recent years the birthrate among unmarried women in between 20 and 30 rocketed 34 percent between 2002 and 2009. In 2007, the study showed, women in their 20s had 60 percent of all babies born out of wedlock. Teenagers has 23 percent and women 30 and older, 17 percent.