Eliot Spitzer to pay his wife $7.5 million in divorce

Eliot Spitzer to pay his wife $7.5 million in divorce

Standing by your man has paid off for Silda Spitzer who will reportedly get an estimated $7.5 million from Eliot Spitzer in their divorce agreement ending their twenty-six year marriage. 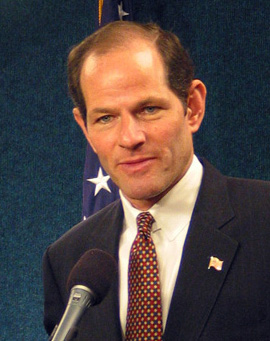 In addition to the money, Silda, according to New York Daily News, “will get to keep the family’s Fifth Avenue pad, get a new car every five years, money for entertainment and activities expenses and up to $100,000 to dish out to her most beloved charities.” In addition, Eliot Spitzer, the former governor of New York, will also pay an estimated $240,000 each year to Silda until she dies.

Silda Spitzer and her dedication to her philandering husband played right out of a Hollywood movie as she stood stone-faced by him after it became public knowledge Eliot Spitzer had been involved in a prostitution scandal which ended his political career in New York City.

The couple waited another five years to formally announce their divorce, but even before the split was public knowledge, Eliot Spitzer had started another affair with Lis Smith, the 30 year old former de Blasio aid.

Eliot Spitzer and his wife Silda had been married for over twenty six years after they met at Harvard. The couple claims their marriage has ended amicably. They have three daughters: Elyssa, 23, Sarabeth, 20, and Jenna, 18.

The couple issued a statement earlier which read, “We regret that our marital relationship has come to an end and we have agreed not to make any other public statement on this subject. All issues between us have been resolved and are uncontested.”

It is estimated that the couple are worth more than $50 million, but financial experts suggest the family may have real estate worth $1 billion. With or without Elliot’s money, however, Silda Spitzer is doing just fine. She is a successful businesswoman who heads an equity firm.

In other divorce news, TMZ reports Game of Thrones director Alex Graves, who directed a previous Game of Thrones where the cruel King Joffrey was poisoned, has announced he will be getting a divorce from his wife, Sarah Graves. According to reports, the couple, who have 2 kids together, have been married since 1995.

Alex Graves has requested he have joint physical and legal custody of his children and will be paying for half of the attorney’s fees for the divorce. Alex Graves has had previous success directing hit television shows such as West Wing and Ally McBeal before moving onto the hit HBO series Game of Thrones, which is currently in its fourth season.