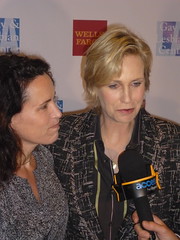 “It’s two people who decided it’s better to go apart than stay together,” she told the legendary interviewer, now hosting a Web series on Hulu.

Lynch, who plays the coach on the popular musical comedy show on Fox, met Embry, 45, at a San Francisco fundraiser for the National Center for Lesbian Rights in 2009 and married on Memorial Day a year later in Massachusetts, a state that allows same-sex marriage. The couple registered for a domestic partnership in California, where they made their home.

Lynch told King  she and Embry “remain friends” and that Haden, Embry’s daughter from a previous relationship who is “very dear” to Lynch, is faring well considering the circumstances. It’s not a smooth “Glee” number, though, Lynch admitted.

“We have to remain adults, which we have,” she said. “We keep everybody – especially Haden’s – good in our mind.  Yeah, all’s good. [Haden’s] a little girl who’s very dear to me. She’s 10 and she’s doing great.”

Lynch, 53, said although she considered it “wonderful” to be married, she and Embry felt it was time to move on with their lives in different directions.

“It’s not dramatic, it’s not a horrible thing. It’s something that we’re dealing with,” she said.

Sources connected to the couple have told scandal site TMZ they don’t have a prenuptial agreement, which means they can expect an even split of all marital assets, something that “will all be determined later.”

Same-sex marriages are not legal in California, but the state recognizes marriages from states where it is. The California courts are expected to dissolve the union, and because it’s a community property state, the couple’s assets will be split, legal experts said.

Embry, 44, a clinical psychologist, has a master’s in philosophy from Columbia University, and a master’s and Ph.D. in psychology from the University of Washington. She practices at the Carter Psychology Center in Sarasota, Florida. She has one daughter, and adopted the daughter of a former girlfriend, Kimberly Ryan, in 2000. When Embry and Ryan broke up in 2004 they entered into a custody agreement which granted them joint custody of their their adopted daughters. In 2007 Embry was prevented from exercising her visitation rights and filed suit. A Florida circuit court granted Ryan’s motion to dismiss on the grounds that Florida law prohibits adoptions by same-sex couples. An appeals court overturned that opinion based on the “full faith and credit” clause of the U. S. Constitution.

For her “courage and perseverance in securing her rights as a parent,” Dr. Embry received an award from the National Center for Lesbian Rights, which provided legal support in her initial suit. She met Lynch when she received the award at the San Francisco. Lynch and Embry were wed at the Blue Heron Restaurant in Sunderland, Massachusetts, and lived in the Laurel Canyon area of Los Angeles.