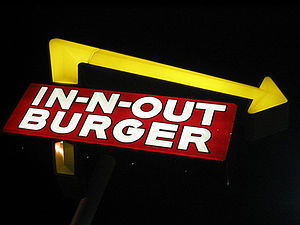 California based In-N-Out Burger is famous for serving up some of the best burgers, fries and shakes in the industry. The heiress to the burger kingdom, however, is serving up something even richer than their hand spun shakes and bigger than their famous Double-Double: child support.

Lynsi Torres, president and owner of In-N-Out Burger, is the heiress to the fortune created by her grandparents Harry and Esther Synder, who founded the fast food chain in 1948. According to California divorce documents, the 30 year old shares custody of eight year old twins with her ex-husband Richard Martinez, whom she divorced in 2011.

Torres, recently named by Bloomberg as the youngest female billionaire in the United States, is also responsible for the twins’ private school tuition. The documents also show that because of a prenuptial agreement, she owes her ex-husband nothing in spousal support. Torres reportedly takes home a monthly salary of $50,000.

Martinez is the second husband of the In-N-Out heiress. They married in 2004. In 2011, Torres married her third husband, race car driver Val Torres, Jr.

After grandfather Harry passed away in 1976, followed by grandmother Esther in 2006, Torres became the sole heir to In-N-Out Burger. Her father, H. Guy Snyder, died of a drug overdose when she was 17. In-N-Out began as and remains a privately held company.

According to the Bloomberg Billionaires Index, Torres’ trust fund granted her half ownership of the company when she turned 30. She will get full control of the company at age 35. In-N-Out, once solely a California operation, has expanded into Arizona, and in the past couple of years, as far east as Texas. Torres has no college degree or former business training.

According to published reports, Torres became interested in Val Torres as her marriage to Martinez ran aground. He deeply held religious beliefs, she said, caused her to seek a speedy end to her second marriage. She married Torres shortly after her divorce to Martinez was finalized.

“I am uncomfortable dating until my marital status with [Martinez] is terminated,” Torres told the court in her filing. “Dating another man while married is contrary to my Christian beliefs and of many people with whom I work with at In-N-Out and through my charity work. I am concerned if I were to start dating before judgement is entered in this matter it would be detrimental to my public Christian image, which will undoubtedly damage In-N-Out’s corporate image, and possibly effect our profits and limit our ability to market to faith based organizations. Until the judgment in this matter is entered, I will either be forced to delay any new relationship, or violate my personal beliefs.”

Torres recently put her $17.411 million Los Angeles home on the market. The house has seven bedrooms, an eight-car garage, sixteen bathrooms, marble floors, and more, all sprawled out on a spacious 4.16 acres.