Lamar Odom says Khloe Kardashian will always be his wife

Lamar Odom says Khloe Kardashian will always be his wife

At least there is one member of the Kardashian clan who is still holding out for love. According to ABCNews, Lamar Odom is not ready to call it quits with Khloe Kardashian and end their marriage, but instead, he is holding out. He has decided there is still a chance that his marriage can survive. 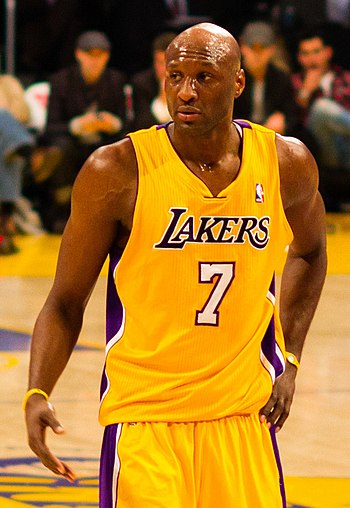 Unfortunately, according to reports, Khloe Kardashian only filed for divorce after what many have said was “months of alleged drug use and infidelity on his part.”  The divorce was filed in December of last year.

But Lamar Odom says not so fast. According to a press conference he held last week with US Weekly, he stated, “I love my wife. She’ll always be my wife, no matter what. Who knows? We don’t know exactly if [the divorce is going through]. Only time will tell. I hope not. But even if we were divorced, she would always be my wife.”

While that’s a lovely sentiment, Lamar Odom has distanced himself from his wife physically by moving to Spain and joining a pro team. He stated that marriage, loving the woman he’s married to and having children remain a top priority for him.

What does he say about his alleged drug use, DUI arrest and other mistakes? While Lamar Odom continues to pledge his love to his wife, he has yet to admit to his drug use or to admit there’s anything he would do differently.

He argued that access to information may have skewed how the American public has viewed his relationship with the Kardashians. Although much of that narrative was generated by his participation on the reality show “Khloe & Lamar.”

No doubt Lamar Odom is saying the right things. He’s admitted that marrying Khloe was one of the best things he’s ever done and the years he was married to her were the “best years of my life.”

What will Lamar Odom admit?

Like all of us, Lamar Odom is admits he is not perfect. He has made mistakes, including infidelity and drug abuse during their marriage. Unfortunately, once the marital bond of trust is broken with infidelity it’s not always easy to regain. He says he’s not mistake free. He has regrets in his life. Now we’ll wait to find out if Khloe believes him or whether she’s had enough of her bad boy and is ready to move on with her life and find someone else she can trust.