Russell Wilson and his wife Ashton to divorce

Russell Wilson and his wife Ashton to divorce

The Associated Press (AP) has announced that Seattle Seahawks quarterback Russell Wilson and his wife Ashton are getting a divorce. According to a statement made by Russell Wilson on Wednesday, he admits this decision has not been made lightly, has not been easy and is hoping that his fans will allow him privacy during this difficult time. He is also requesting prayers. Russell Wilson does not plan to comment further on his marriage or the impending divorce. 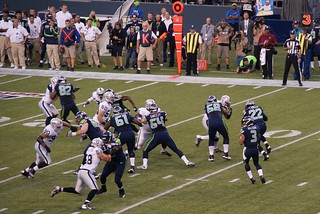 Russell Wilson and his wife have had a very short marriage, even by Hollywood and celebrity standards. The pair was married in January 2012 before he was drafted by the Seattle Seahawks and immediately following his football career at Wisconsin University.

Russell Wilson was instrumental this year in helping his team, the Seattle Seahawks, win their first Super Bowl title by beating the Denver Broncos. The couple had been visible at Seahawks events for his first two seasons in the league.

In other divorce news, TMZ reports Marc Anthony and his ex-wife, former Miss Universe Dayanara Torres, are continuing their battle over child custody. According to Dayanara Torres, she is currently being forced to live in a “crappy San Fernando Valley hovel with their 2 kids while he lives lavishly.” And according to Anthony’s financial documents obtained by TMZ, she may be right. He is spending an average of $305 thousand per month to fund his lavish lifestyle.

So what does someone making an estimated $40 million over the last four years spend their money on? It’s hard for most of us to fathom, but he’s spent $400,000 on domestic help over the last two years, $220 thousand for auto leases, $1 million for a California home and another $700 thousand for two New York residences.

So what does Dayanara Torres want? She wants a few more greenbacks. Instead of the estimated $13 thousand that she’s currently getting for child support (which is enough for 99.9% of the world’s population to live on each month), she wants the amount upped to $113 thousand per month. Maybe she has a point. Shouldn’t she and the children be getting more than the maids?

Finally, there’s Bethenny Frankel whose divorce has dragged on longer than the marriage and has now cost the reality star more than $100,000 in legal fees for her ex-husband. Unfortunately, it looks like it’s going to cost a bit more because the pair have not even finalized the terms of the divorce settlement.

The pair filed for divorce in January 2013 and have been battling it out ever since. Now the courts are going to require Bethenny Frankel to pay $100,000 to her ex-husband’s lawyers. But according to Bethenny Frankel’s financial records her brand Skinnygirl fold for about $100 million- so who cares about $100,000.