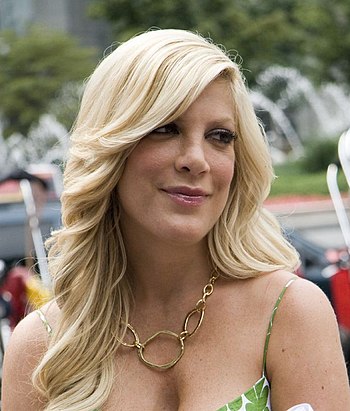 According to one friend, Tori would send Dean packing if she could, but because the couple has no prenuptial agreement and Tori is the main source of income for the couple, it is likely that Tori, not Dean, would be paying child support. It’s also likely Dean would fight for joint physical and legal custody of the children. Friends note the situation is devastating for the 90210 star and for the children.

According to sources, the Spelling marriage hit the rocks when Dean McDermott revealed he had been with more than one woman. McDermott admitted to the affairs after entering rehab where he was encouraged to confess and admit the truth to his wife.

Not only was McDermott unfaithful, he also allegedly did not protect himself during his escapades, putting both him and Tori in jeopardy. This admission is likely to create a riff that will be difficult for Tori Spelling to overlook.

After entering rehab on January 24th, 2014, McDermott issued a statement to People Magazine saying: “I am truly sorry for the mistakes I have made and for the pain I’ve caused my family. I take full responsibility for my actions and have voluntarily checked myself into a treatment center to address some health and personal issues. I am grateful to be getting the help I need so I can become the husband and father my family deserves.”

While it’s noble that McDermott is seeking help and has apologized for his actions, it’s not known yet how Tori Spelling will react and if she will be able to forgive him and continue to remain in the marriage.

Who is Tori Spelling?

Tori Spelling is right about one thing- divorce is not cheap. The costs will vary depending on whether you have a collaborative or adversarial divorce, whether you have children, if you have extensive property to divide and the costs to hire a lawyer. Although hiring a lawyer may be one of the highest expenses, it is generally necessary.

If you want to reduce the cost of divorce its best to try to negotiate as much as possible outside of the courtroom. If you choose a collaborative divorce and you and your spouse can work together to negotiate child support, child custody and property distribution and simply have the judge sign off on your agreement, you can save hundreds or thousands of dollars in divorce costs.